Following his huge release with Trends in 2018, Boylan released his fat as fuck debut LP from Nomine Sound last October. All the good things we love in the UK Bass scene; grime, dubstep, jungle, breakbeat distilled into “2 hrs Sleep” with top MCs.

Pinch is one of my fav dubstep producers since his 2006 Planet Mu release, Qawwali. Now he teamed up with Kahn and KILLA P and his Army to mix dubstep, grime, and dancehall to deliver us the year 4000 style banger. Don’t sleep on this, TectonicRecordings only pressed 500 copies.

This year, Sir Hiss first greeted us with a dark, hazy, warped, and weeping vinyl, “Rolling” (released by White Peach Records), which was followed by an EP “Frequent Flyer”. I thought that was it for him this year, but NO!! Like any other hardworking Bristolian, he won’t stop. I first heard the A-side, Tehran Gunsgots, of his new 12″ on Kahn’s mix for BBC 1Xtra over a year ago. The interesting part of the song was the sample he used, “Anilar Bana Yeter” from Gulden Karabocek (a Turkish singer active in the 70s to 00s). If you are following his releases, sample usage is not news (he is using samples from all over the world, east to west). But I was not expecting a song from Gulden Karabocek. Anyways, now we have Tehran Gunshots on wax accompanied by Mr. Sandman on the B-side, released by his own label No More Mailouts. Already sold out at their Bandcamp store. Don’t sleep on this!

“Pirate radio is everywhere in London, born in the 60’s from rusting anti-aircraft towers in the mouth of the Thames. Today’s broadcasts are hidden in plain sight, transmitting from secret tower block studios via homemade rooftop antennas.”

Vice and Palladium filmed a great documentary about the London’s pirate radios for their documentary series, Exploration. London Pirate Radio is the sixth in these series and it features many pirate radioheads like Logan Sama, Matt Mason (author of the book The Pirate’s Dilemma) and 60’s original pirate Tony Pine.

Logan Sama compiled a grime mixtape for this documentary, you can download it from here. 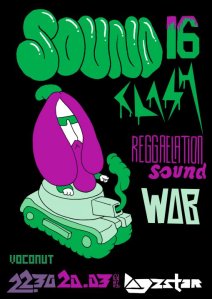 Our sisterz, Reggaelation Sound will take the stage to select the best roots & dub tunes all night for your own meditation. Drop by Dogzstar on Saturday night. You can not have more important thing on that night instead of this bass meditation. B-Line and Steppa Sista are two of the best selektaz of Istanbul I’ve ever seen (consider that I saw most of them).
Reggaelation Sound will be accompanied by the dubstep duo, WOB. I played with them once, and also believe me they are really good.

Here’s the Rusko‘s brand new video for his ‘Woo Boost’ single from Mad Decent.It resembles Ceephax‘s videos, but it is not as good as them.
Btw, the track is ok but I don’t like it much, I think Borgore‘s remix is way better than the original.

On 5th of March, DMZ celebrated it’s fifth birthday as an annual bday bash at The Mass, Brixton feauturing dubstep’s finest producers&DJs. Here are some photos&vids from that night. Enjoy..
ashes57
RosaMaria_Nika

*above photo is from ashes57‘s dmz 5th bday set 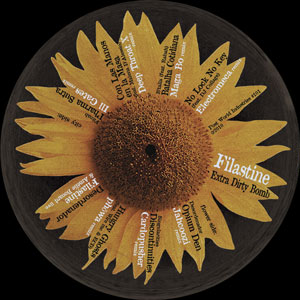 What I last heard something from Filastine is, he attended the Bike Bloc with his bicycle mounted megaphones during the Copenhagen Climate summit.Here’s what I mean:

Then we came to today.Following his successful 2009 album, Dirty Bomb, Mr. Filastine gave us a present consisting of 7 remixes and a live recording.He also prepeared a mix for Dutty Artz supporting his new EP release.You can get it from here.
I have no words for this EP except adding Filastine‘s own thoughts about tracks, direct from his blog:

A1. Opium Den (Jahcoozi remixes Desordenador)-Deservedly loved and respected Berlin heroes that somehow make ecstatic pounding bass music that speaks about serious themes like gentrification & the vacuity of hipsterism. We played together in Marseille once, they were wonderful.

A2. Discontinuities (Cardopusher remixes Singularities)-Just walking down the street in Caracas is an act of will. Doing so with dreadlocks down to your ass is asking for serious trouble, and trying to introduce audiences to music like breakcore & dubstep in such a context demonstrates a rare fortitude of character. Cardo lives in Barcelona now, he’s a neighbor.

A3. Hungry Ghosts (phowa remix) feat. Wire MC-I met the Jeremiah aka phowa at dawn in a crowd of sleep-deprived ravers at a music festival in the Canadian forest. He told me that he’d be coming to Barcelona. Everyone says that, but he actually showed up. Later in Vancouver he organized one of the most enjoyable gigs of the 2009 tour, at a derelict movie theater, followed by an afterparty so packed that it was drizzling inside from the sweat condensed on the ceiling.

A4. Desordenador (live version feat. cellist Amélie Bouard)-The day before I was due to fly to Reunion Island from Lyon, France, my accompanying VJ cancelled. The ticket permitted passenger name changes, with less than 24 hours notice we somehow found & confirmed cellist Amélie as a substitute invited artist. She heard my songs for the first time with headphones during the 12 hour flight to the Indian Ocean. Now we are a regular team.

B1. Pharma Sutra (Ill Gates remixes Fitnah) *only on the vinyl-Deeply lucky to have met this other Mr. Gates, a digital jack of all trades- producer, vj, and educator who is not afraid to get political. His contribution was too good to wait for this delayed release, we let it out digitally earlier on compilation, where it topped Beatport’s charts.

B2. Con Las Manos en la Masa (Deep Throat X remix) feat. Malena D’Alessio-They came up to me during a wild semi-legal street party in Tokyo with a CDR and saying, with polite smiling and bows, “japanese ghetto sounds,” later i saw them on stage rocking old school drum machines while wearing balaclavas. They are associated with the expanding situationist/anarchist scene there.

B3. Batalha Cotidiana (Maga Bo remixes B’talla) feat. Rabah-Maga Bo is my closest colleague & fellow bootstrap nomadic producer. Without each other we probably would have long ago given up on the precarious and often degrading attempt to survive via music. He spends half his year moving around (mostly africa), the other half in a cinderblock hut on the roof of a residential skyscraper in Rio de Janeiro.

B4. No Lock No Key (Electromeca remix) feat. DJ Collage-On tour in australia in 2007 I was gifted a few gigs of breakcore and found Electromeca’s work. It’s next-level grit, in his own words: “hectic B-Boys break-dancing in a puddle of motor oil, The Bomb Squad meets Russolo in a Z-movie disco-club, FM-radio harsh beats, dismantled stuttering beat-box, muddy boom-bap”

Just choose your medium and grab it, either wax or digital (personal choice is vinyl definitely).

It’s really a rough week for me, I do not have much time to post here or dubstr or anywhere.But now it’s all over, we succeeded to transfer datas over fiber optic cables and all flight datas are coming to our…wait wait what the fuck I’m talking about.Too much work make my brain melt I think.
Anyway, 13th of February, which is tomorrow, Soundclash crew, which is also the Voconut crew, gonna present you Hessle Audio’s Ben UFO.Also, I’ll be playing along with Astrofonk and Obookubo.So, be there or be square…